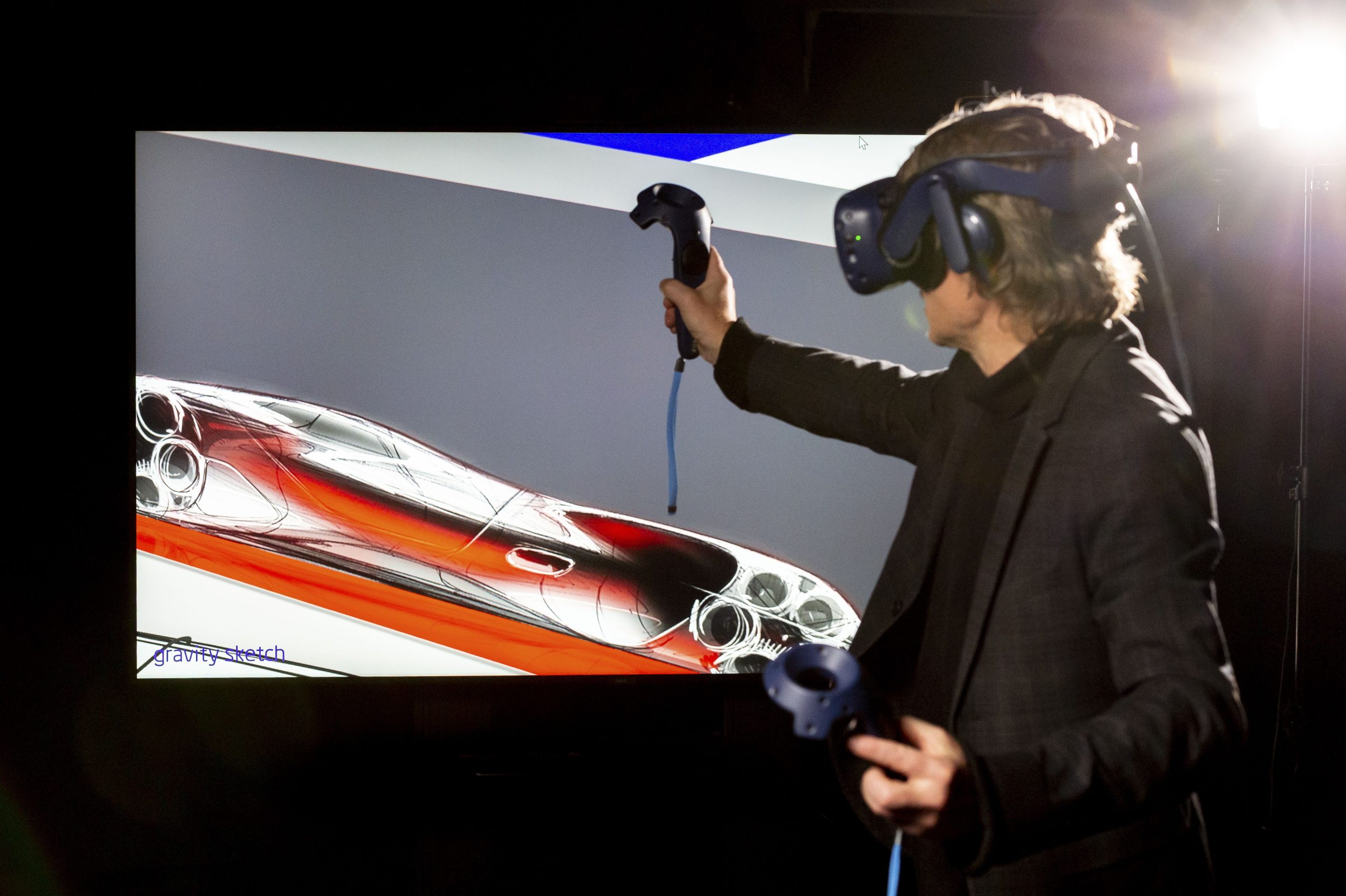 3D sketches: a revolution in design

Whether in film, video games or landscape mapping – 3D modeling has made great strides in the last few decades. Today, before it goes into production, a car is first “born” in a 3D world. Thanks to increasingly modern digital tools, designers now need neither a pencil nor a drawing board for their designs.

In the current issue of the eMove360° magazine in german language (download here for free), designer from the Renault Group, Udo Hischke, gives an insight into the working methods of the 3D draftsmen at Renault.

A man, equipped with a VR headset and a controller in each hand, stands in the middle of a room, gesticulating wildly and seems to be drawing invisible lines in the air. A curious scene that is clearly reminiscent of virtual reality games. But Udo is not a gamer, but a designer. His tool is a new 3D sketching program, a drawing method currently being rolled out in Renault Group’s design department.

3D Sketching is a form of intuitive technology that allows you to draw anywhere in the air. Drawing in the air? Pablo Picasso carried out such experiments as early as 1949. The famous Spanish artist replaced the pencil with a lighter to paint his “dancing lights”. These fleeting drawings were immortalized by photographer Gjon Mili, and the technique became known as light painting.

Today, 3D sketching is a similar concept, but it requires the use of a VR (virtual reality) headset. VR technology was invented 50 years ago but only became more widespread about 10 years ago with the arrival of consumer models for video games. With the headset, the designer immerses himself in a virtual 360-degree drawing studio. With a controller in hand, he can choose colors from a palette, draw lines, create shapes, fill areas and much more. An associated program models and records individual movements.

With the drawing on digital tablets, the work of designers experienced a first major change at the end of the 1990s. 3D sketching goes one step further: Designers no longer need a tablet, pen or mouse, or even a desk to work.

The continuous improvement of technology gives designers tremendous freedom and makes their projects even more accessible. It’s never been easier to quickly create a 3D sketch, create perspectives, model 1:1 scale shapes or fill volumes. “That saves a lot of time,” says Hischke. 3D sketches therefore make it easier to experiment with new ideas and quickly bring them to life.

Another advantage for designers: geographical restrictions are a thing of the past. “As long as you have an internet connection, you can work together on a project, even if you’re actually thousands of kilometers apart,” says Hischke. With the help of a microphone in the VR headset, designers can communicate and work with each other without having to leave their home or office. Misunderstandings in the exchange of projects are much rarer.

The 3D sketches can also be used more easily by other participants in the development of a vehicle. Designers simply give a digital copy of their work to a model maker, who makes a physical model of the design, or to an engineer, who assesses the feasibility of the design.

The new technology not only reduces costs and manufacturing times, but also makes it easier to view and review working sketches. In concrete terms, designers can now work out certain details of their drawing more precisely, edit sketches and models better, present projects in real time and, thanks to compatibility with 3D printers, even breathe life into their drawings.

Hischke says, “While 3D sketching is another tool, the traditional methods still play a role.” Digital and physical techniques go hand-in-hand. They both play a role in the automotive development process. Model builders still use playdough to make models. They are an ideal material when it comes to creating the silhouette of a new model and they are crucial to the success of a design in the final stages of the design process. Also, the 3D sketch will never replace the designer’s talent for drawing and sense of form, despite the fact that it makes work easier. These will always remain the cornerstone of the design process. www.renault.de