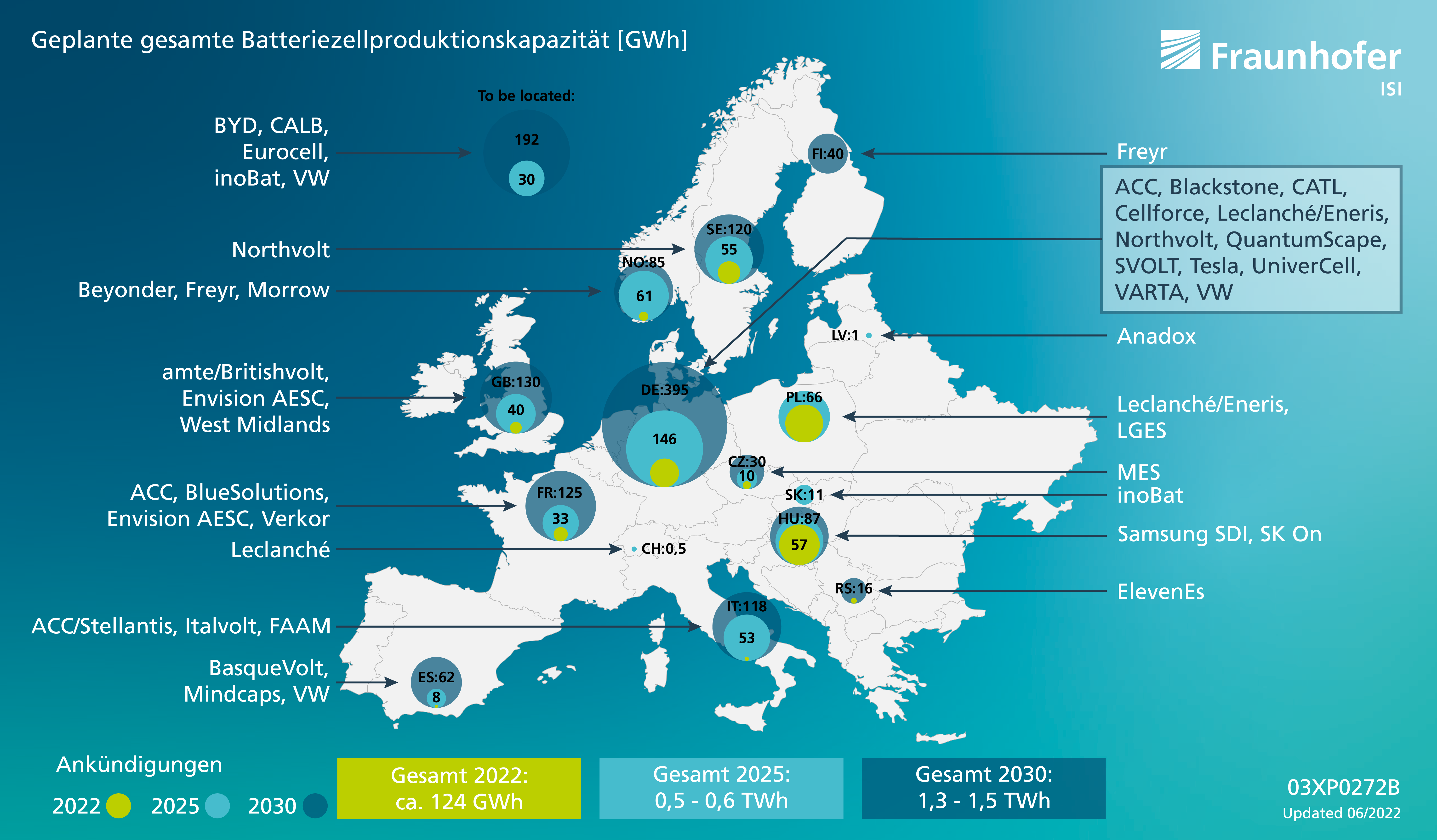 The high demand for lithium-ion batteries is currently being met mainly by manufacturers in China, Japan and South Korea. But for some years now there have also been increasing efforts in Europe to establish large battery cell factories – often called gigafactories: On the one hand, many established Asian cell manufacturers are expanding to Europe, on the other hand, a large number of newly founded European start-ups are planning extensive investments in cell production or are already implementing them. As part of the BMBF-funded accompanying measure “BEMA 2020 II – Accompanying measure to the Battery Materials for Future Electromobile, Stationary and Other Industry-Relevant Applications (Battery 2020) funding initiative”, Fraunhofer ISI is evaluating these announcements by the various players and, on this basis, drawing up forecasts of the cell production capacities that will be created in Europe.

Germany will cover a quarter of European cell production

The evaluations show: According to the announcements of the cell manufacturers active in Europe, production capacities of up to 124 GWh could already be reached in the course of 2022. By 2025 these are expected to quadruple to over 500 GWh, and by 2030 even to increase tenfold to up to 1.5 TWh. This means that by the end of the decade about a quarter of the globally announced production capacities will be created in Europe. The projects to build battery cell factories span at least 15 European countries. Germany plays a central role in this, as more than a quarter of the European cell production capacities will be created here, at just under 400 GWh.

Dr Lukas Weymann, who researches battery topics at Fraunhofer ISI and has analysed the manufacturers’ data, explains: “This rapid build-up is being driven to a large extent by European players such as Northvolt, VW and ACC. The three mentioned alone have together announced about one third of the European cell production capacities.” Northvolt is building two large cell factories in Sweden as well as a gigafactory in Heide, Germany, with construction set to begin next year. Even before this announcement, Northvolt was planning to build a factory with VW in Salzgitter, which VW will now build independently, as well as another factory near Valencia, Spain. According to Lukas Weymann, the locations for three more cell factories have not yet been decided, but the planned maximum production capacity of 40 GWh, which each of these five factories could achieve in the final expansion, has. The European car manufacturers Mecedes-Benz and Stellantis, together with Saft, are shareholders in the Automotive Cells Company (ACC), which has announced the construction of gigafactories in Germany, France and Italy. ACC, like Northvolt, will benefit from the support of the European Union’s “Important Project of Common European Interest (IPCEI)”.

In addition to the European cell manufacturers, non-European players such as CATL (China) and Tesla (USA) with their planned German cell factories, as well as LGES and Samsung SDI (both from South Korea) with their Eastern European factories, will also establish a large share of European cell production. In total, over 40 cell manufacturers have announced plans to build battery factories in Europe. www.isi.fraunhofer.de

You can find this article in the current eMove360° magazine in german language free of charge as a PDF download or you can order the print edition – just send a short message to: sabine.metzger@emove360.com.