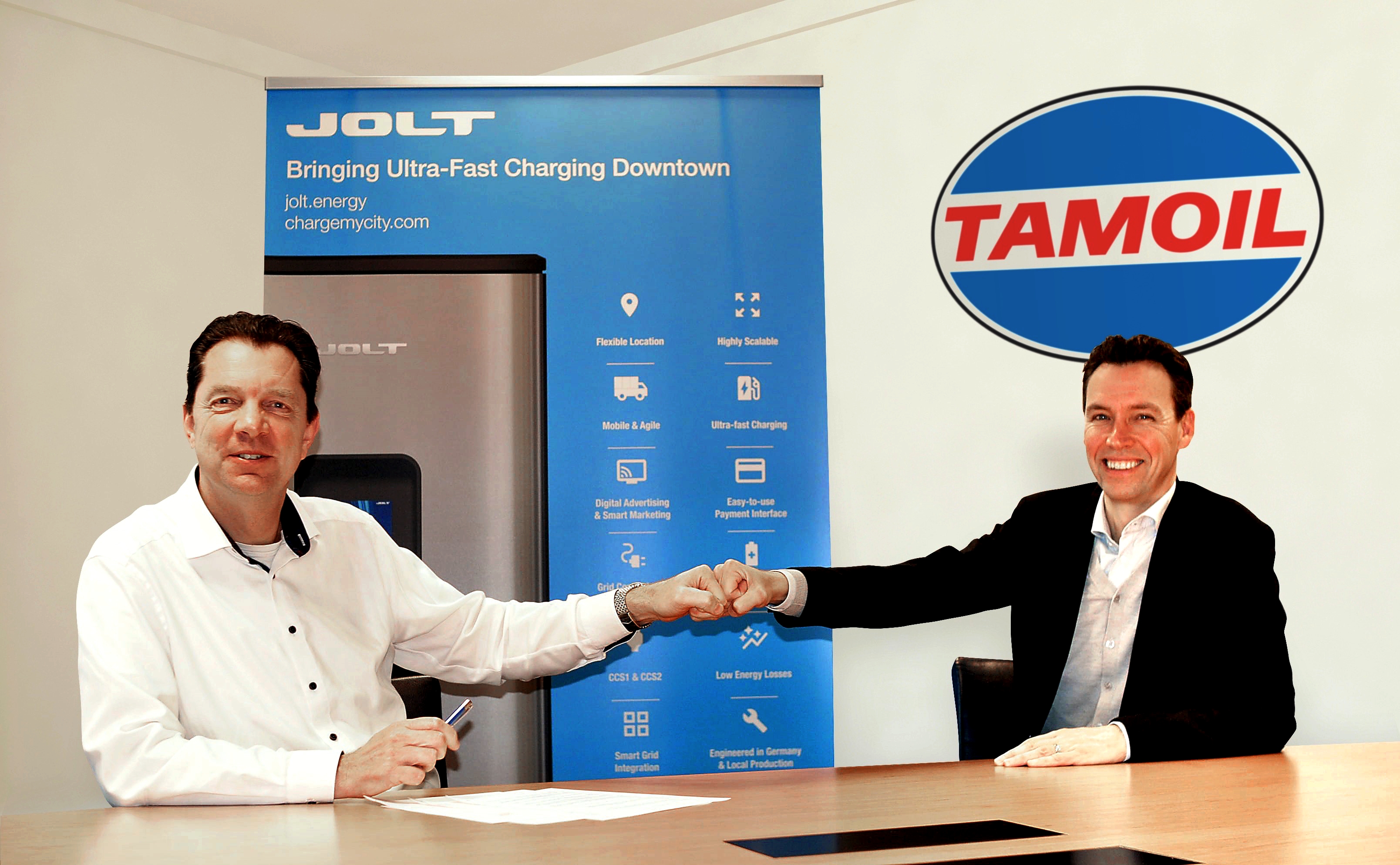 Ridderkerk & Munich, December 14, 2021 – JOLT and Tamoil Nederland are pleased to announce their agreement to equip up to 33 Tamoil filling stations in the Netherlands with MerlinOne Ultra-Fast charging stations from JOLT from 2022.

“The cooperation with JOLT marks the beginning of a quick changeover to the service for our growing customer base in the field of electromobility. The MerlinOne Ultra-Fast Charger is an important prerequisite for us to flexibly expand our range of e-mobility and to meet the challenge of a protracted one and costly upgrading of the power grid. We look forward to going on this e-journey together with JOLT “, says Ronald Kempen, Managing Director of Tamoil Nederland BV.

The MerlinOne charging station was specially designed and developed by JOLT for charging situations in cities in which the existing power grid makes it difficult to provide ultra-fast charging processes. “Once the project is up and running, drivers will be able to recharge their weekly driving needs in 10-15 minutes, a significant improvement over existing home and road charging alternatives,” said Maurice Neligan, CEO of JOLT.

Tamoil has been in the Dutch fuel market for more than 70 years. The company currently operates 225 petrol stations in the Netherlands, giving it a market share of more than 5%. The company invests in sustainability and is socially committed. Tamoil offers its customers sustainable fuels at a large number of filling stations and, with its share in Zonnepark XXL in Assen, produces green electricity for its filling station network. Tamoil is part of the Oilinvest Group, a mineral oil company with petrol stations in Italy, Germany, Switzerland, Spain and the Netherlands. The headquarters of Tamoil Nederland B.V. is located in Ridderkerk.

JOLT Energy Group is a Dublin, Munich and Boston-based group that was founded in 2017 by a team of former automotive and power engineering executives with the aim of changing the traditional conventions of urban charging. JOLT has set itself the goal of building a network of ultra-fast charging stations in large cities over the next decade. JOLT uses advanced mobile charging stations with integrated batteries to overcome the weaknesses of the existing power grid. In some cases this means that the charging stations are set up like batteries on the streets of the cities and exchanged for freshly charged units when they are empty.

This cooperation project with Tamoil is part of JOLT’s ChargeMyCity campaign, which aims to promote the mobility change in municipalities by bringing property owners, financiers and operators of charging stations together in regional charging projects.