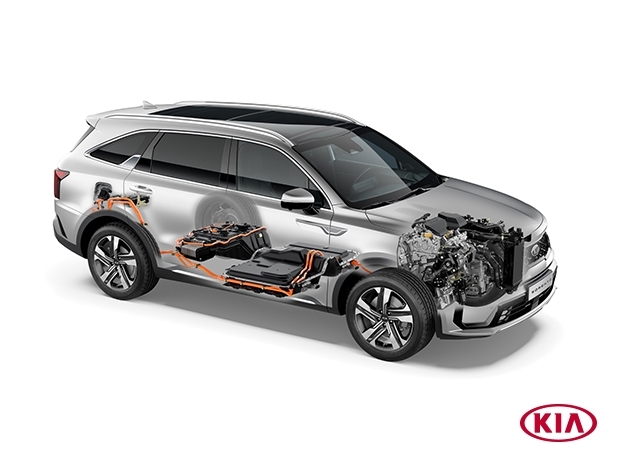 Kia Motors has released a ‘cutaway’ image revealing the intelligent packaging of the new three-row, seven-seat Kia Sorento Plug-in Hybrid. The image illustrates how the layout of its plug-in hybrid technology maximises passenger and luggage space. The Sorento will be one of the most practical plug-in hybrid SUVs on the market when European sales commence early in 2021. The new image reveals how the large battery pack, fuel tank, engine and electric motor are integrated within the vehicle’s structure, retaining maximum space for luggage and up to seven occupants.

Under the bonnet of the Sorento Plug-in Hybrid is a powerful 1.6-litre T-GDi (turbocharged gasoline direct injection) engine, producing up to 180 ps and 265 Nm torque. This is supplemented by an electric motor, producing 67 kW and 304 Nm torque. Combined, the powertrain offers up to 265 ps and 350 Nm torque – making it the most powerful Sorento ever sold in Europe. The electric motor is mounted between the engine and transmission, enabled by the neat packaging of the downsized turbocharged engine beneath the bonnet. The layout allows the Sorento Plug-in Hybrid to operate in all-electric mode, or draw on a blend of electric and combustion engine power – providing power to the front wheels or all four wheels, depending on vehicle specification and road conditions. The car’s high-capacity 13.8 kWh lithium-ion polymer battery pack is located beneath the driver and front passenger seats. The battery pack is sandwiched between the cabin floor and the Sorento’s underfloor. In the Sorento’s all-wheel drive configuration, the ‘saddle-shaped’ battery pack lays over the top of the propshaft. This layout means the battery pack doesn’t intrude on the Sorento’s cabin or cargo space in the same way that it might in many other plug-in hybrid models, where the battery often takes up valuable boot space.

The battery pack features an independent water-cooling system for optimal heat management and efficiency. The self-contained cooling system enables the battery pack to regulate its temperature effectively in its confined location. In addition, placing the battery low down in the centre of the body, between the two axles, also keeps the centre of gravity low and aids weight distribution. Locating the mass of the battery closer to the centre of the vehicle contributes to the Sorento’s balanced dynamic character, on- and off-road, and enhances handling agility. The Sorento PHEV’s 67-litre fuel tank is located beneath the floor underneath the second row of seats, while the 3.3 kW on-board charger is situated beneath the cargo floor. The location of these components means third-row passengers still enjoy plenty of legroom and a comfortable seating position, while cargo space is still generous.

Space for seven plus luggage

The Sorento’s clever powertrain packaging means it offers generous space for up to seven passengers. It also offers one of the largest luggage capacities in its class – up to 809 litres for seven-seat models (with the third row of seats folded down) or 898 litres for five-seat models, depending on specification. At the very least, the Sorento Plug-in Hybrid can easily accommodate five people and a significant amount of luggage. The boot is the right size and shape to fit a pushchair and a couple of suitcases or weekend bags, or up to four large ‘flight’ suitcases. With all seven seats in place, the 175-litre boot can accommodate the accessories needed for a family day out, such as a picnic hamper, outdoors equipment, or a couple of weekend bags. The 50:50 split-fold third-row seats are easy to fold downwards independently, using levers just inside the open tailgate to create a completely flat boot floor. The 60:40 split-fold second row of seats can also be folded down easily to create even more space for longer, larger loads, such as sports gear or, for the more domestically-minded buyer, flat-pack furniture. When the Sorento Plug-in Hybrid goes on sale early in 2021, it will be one of only very few seven-seat plug-in hybrid SUVs available on the market, and certainly one of the most practical. European sales are due to commence in several markets during the first quarter of 2021, and the car will be available to order in most of Kia’s global markets by the end of 2020. It will be sold in Europe with Kia’s unique seven-year, 150,000-kilometre warranty as standard.