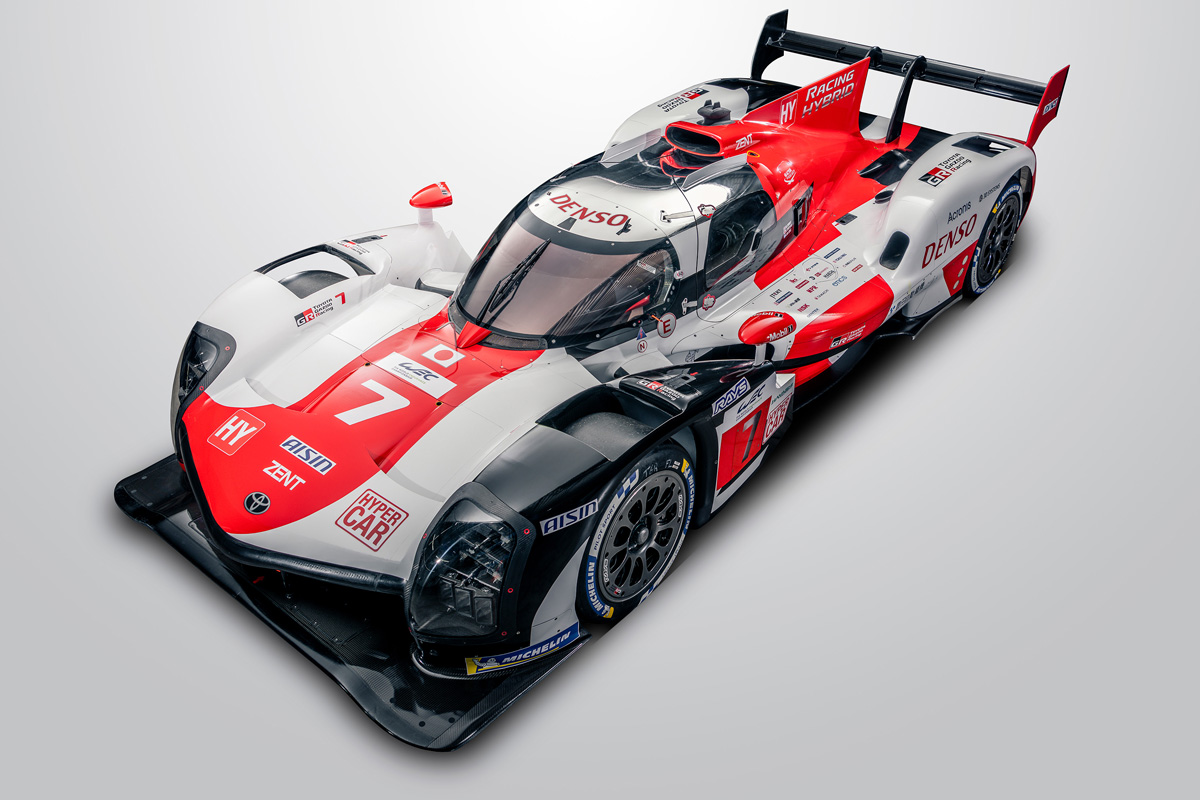 TOYOTA GAZOO Racing begins a new era of endurance racing with the launch of its all-new GR010 HYBRID Le Mans Hypercar, which will compete in the 2021 FIA World Endurance Championship (WEC). The reigning World Champions and three-time Le Mans winners will defend those titles against new manufacturer competitors using a racing version of the upcoming hypercar road car, featuring powertrain technology developed in the TS050 HYBRID and highlighted via new Racing Hybrid branding.

The GR010 HYBRID is a prototype racer developed over the last 18 months in partnership by engineers at the team’s headquarters in Cologne, Germany and the electric hybrid powertrain experts at Higashi-Fuji in Japan. The GR010 HYBRID incorporates a powerful four-wheel drive racing hybrid powertrain, with a 3.5litre V6 twin turbo engine, providing 680PS to the rear wheels and combining with a 272PS motor generator unit, developed by AISIN AW and DENSO, on the front axle. Total output is capped at 500kW (680PS), meaning the GR010 HYBRID’s sophisticated electronics reduce engine power according to the amount of hybrid boost deployed.

The striking new look of the racing prototype reflects the appearance of its inspiration, the GR Super Sport hypercar which made its public debut during a demonstration run and ceremonial trophy return at the 2020 Le Mans 24 Hours and is currently in development. To mark this new era for TOYOTA GAZOO Racing, a new livery includes the iconic GR lettering to indicate the strong link between race and road cars. TOYOTA GAZOO Racing enters its ninth season in WEC with the same driver line-up which brought Le Mans and World Championship glory to the team in the 2019-2020 campaign. Newly-crowned World Champions Mike Conway, Kamui Kobayashi and José María López will drive the #7 GR010 HYBRID while Sébastien Buemi, Kazuki Nakajima and Brendon Hartley race with the #8 car. Nyck de Vries continues in his role as test and reserve driver. They have already started an intense programme of developing the GR010 HYBRID, with two three-day tests already completed as the team adapts to new regulations which are a significant shift in terms of performance and philosophy.

As part of a cost-cutting initiative incorporated in the regulations, the new GR010 HYBRID is 162kg heavier and with 32% less power than its TS050 HYBRID predecessor, with Le Mans lap times expected to be around 10secs slower. It also has bigger dimensions; it is 250mm longer, 100mm wider and 100mm higher. For the first time since the beginning of its WEC project, TOYOTA GAZOO Racing will participate without a rear motor generator unit (MGU), with the single permitted MGU located on the front axle. This means a starter motor must be fitted on the GR010 HYBRID while fully hydraulic rear brakes are also required.

The GR010 HYBRID features state-of-the-art aerodynamics, optimised for efficiency, and developed using powerful Computational Fluid Dynamics software and wind tunnel testing. The new technical regulations permit only a single homologated bodywork package, with only one adjustable aerodynamic device. The GR010 HYBRID will therefore compete in the same specification at both low and high downforce circuits, with an adjustable rear wing modifying the aerodynamic characteristics. For the first time, the top class of WEC and Le Mans will feature a balance of performance, meaning organisers will modify the performance of each car on a race-by-race basis, regulating energy usage and weight, targeting identical performance potential from each Le Mans Hypercar. That should ensure close racing between TOYOTA GAZOO Racing and its hypercar competitors Scuderia Cameron Glickenhaus and ByKolles Racing, as well as Alpine, which will present an additional challenge with its LMP1 car.

Those battles will be fought over six races on three continents, beginning with the 1000 Miles of Sebring on 19 March prior to the 6 Hours of Spa-Francorchamps (1 May) and the season highlight, the Le Mans 24 Hours on 12-13 June. The first World Championship endurance race in Monza since 1992 takes place on 18 July before trips to Fuji Speedway (26 September) and Bahrain (20 November), all of which are six-hour contests.

“It is a fascinating time for endurance racing, with the new Le Mans Hypercar class, and also for TOYOTA GAZOO Racing, with the launch of the GR010 HYBRID. This car represents our next generation of racing hybrid. During our LMP1 era, since 2012, we worked tirelessly to improve and strengthen our hybrid technology for racing. We set new standards with the TS050 HYBRID and our first loop of racing hybrid development is complete; this technology will be available to our future customers soon. Now the second stage will begin. Through our WEC participation, we will refine our racing hybrid powertrain in the GR010 HYBRID, enhance our understanding of hypercar technology and continually develop our staff. We do this with one clear goal: to deliver more exciting sportscars to our customers in the future. The GR010 HYBRID is a preview of our road-going cars and what we learn on the WEC race tracks will directly benefit our customers. For this reason, we are delighted to welcome new competitors to the top category of WEC; a tough fight on the track will inspire us to continuously improve and push the limits for better.”