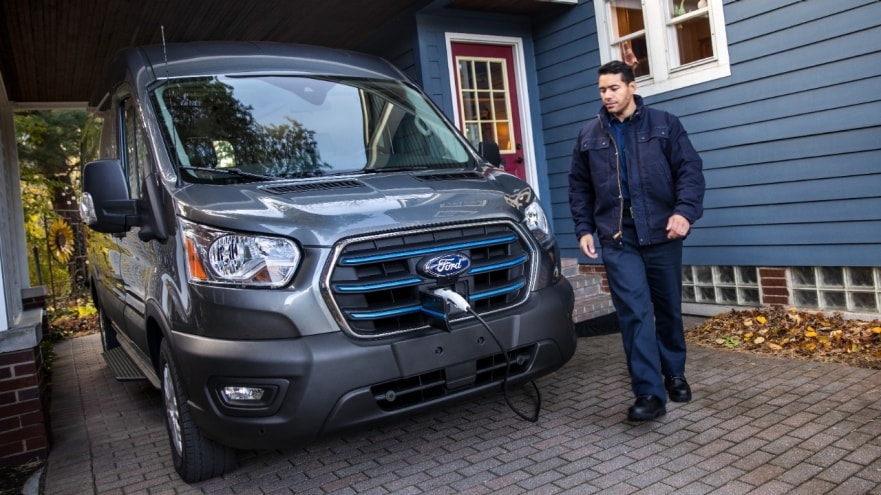 Most shoppers in Germany and the UK would prefer to receive online deliveries transported using electric-powered vehicles, according to a new survey commissioned by Ford. For those in the UK, 58 per cent would prefer their delivery service used an electric-powered vehicle, while this was true of 54 per cent of those polled in Germany. More surprisingly perhaps, 49 per cent of those in the UK would be prepared to wait longer for greener deliveries, with 38 per cent in Germany also happy to receive parcels later. The number of shoppers who would be prepared to pay extra for more energy-efficient deliveries was fewer – but still totalled 28 per cent in the UK and 21 per cent in Germany. Ford commissioned the survey of 1,000 people across the UK and Germany to better understand consumer attitudes towards electrification. 1 In light of COVID-19 lockdowns, the forthcoming Black Friday is expected to be the biggest yet, 2 driving an increase in van traffic delivering goods to customer doorsteps.

There are more than 32 million vans on Europe’s roads 3 and Ford has already begun introducing electrified versions of its best-selling vans for businesses in Europe – part of its more than $11.5 billion commitment to electrifying the company’s vehicle range.  “Shopping from home is very much the ‘new normal’ and it is encouraging that for many people, how they get their deliveries is a key concern. We’re helping delivery companies to reduce their carbon footprint with our hybrid and zero-emissions capable vans, including the upcoming all electric E-Transit,” said Dave Petts, market lead, urban electrified vans, Ford of Europe. Ford’s Transit Custom Plug-In Hybrid van is already on sale across Europe and combines an efficient 1.0-litre EcoBoost petrol engine with an underfloor battery pack. 4 This advanced system delivers a zero-emissions range of up to 50 km and a total range of 500 km, supported by innovative geofencing technology that automatically switches the van to battery-only drive in low-emission zones. Businesses can also set their own geozones to improve air quality in sensitive locations such as schools, parks and around warehouses. The recently announced Ford E-Transit van is a step change for urban delivery vans. It offers the same cargo space as existing diesel Transits and a targeted range of up to 350 km, enabling urban companies to work their usual routes regardless of load and weather.

10.04.2018
Why carsharing plays a decisive role in the breakthrough of electric mobility